Warsaw, June 4th, 2018 – Amidst the heady fragrance of purple and white lilac and bouquets of blossoming pink peonies sold on every street corner of this sprawling capital during early summer, comes the highly anticipated opening of Raffles Europejski Warsaw on June 1st. Bringing over 160 years of history and heritage to the culturally rich Raffles Hotels & Resorts brand, this fully restored Polish icon joins Paris and Istanbul as the third European destination where the inimitable Raffles experience can be found. 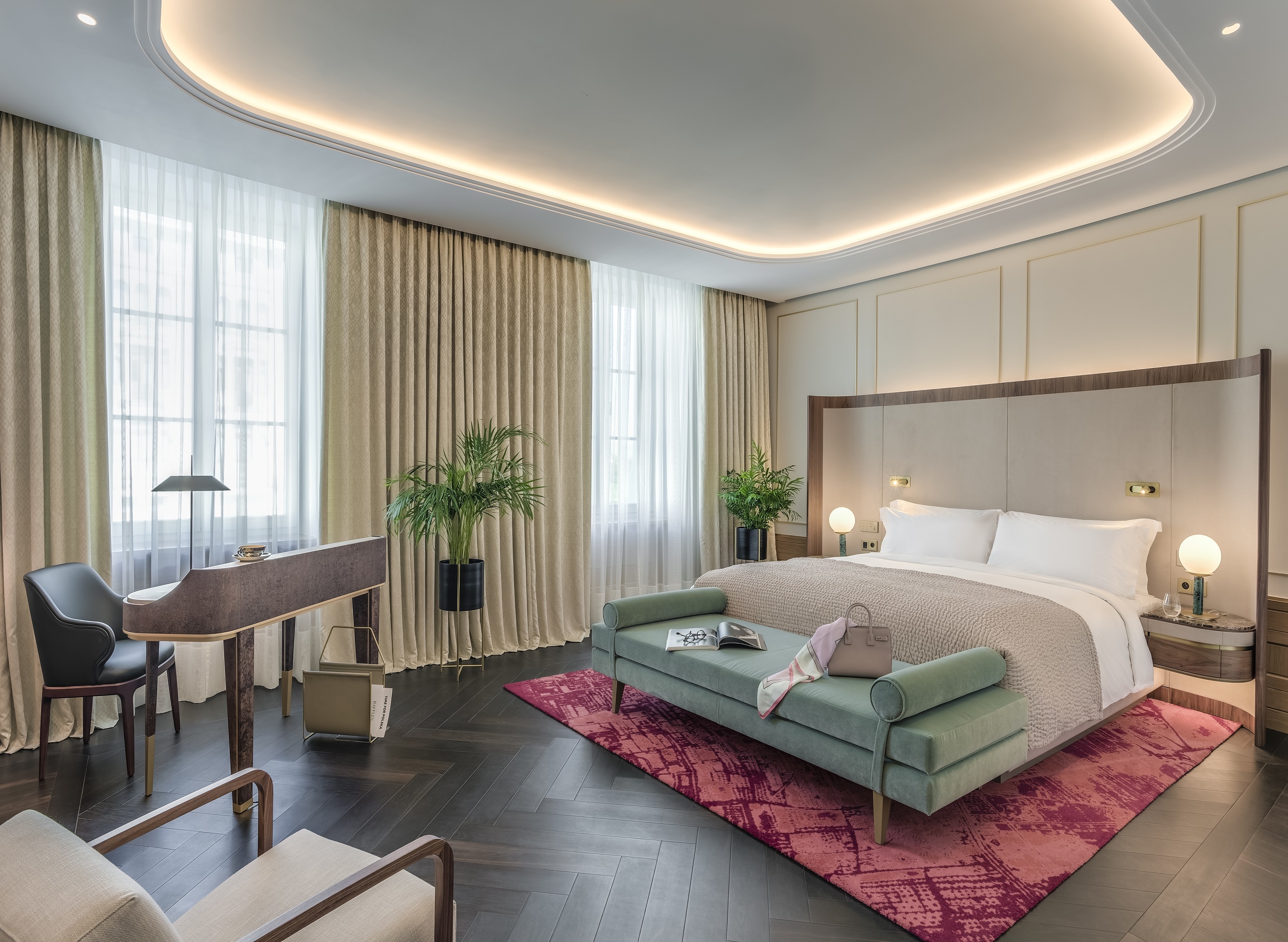 Dating back to 1857, the neo-renaissance palace built by Enrico Marconi and renowned as a Grand Dame of European hotels during the 19th century, has been, over the last four years, painstakingly restored to its pre-war glory. Proudly Polish, the elegant interiors showcase the very best of modern and contemporary Polish art, with a carefully curated Hotel Europejski collection by Anda Rottenberg, a former Director of the Zachęta National Gallery of Art. The Hotel Europejski Art Collection consists of almost 500 artworks created by more than 120 artists, including the legend of Polish Avant-garde Tadeusz Kantor, and the most important representatives of contemporary Polish art such as Wilhelm Sasnal, Monika Sosnowska or Turner Prize nominee Goshka Macuga.

Not only art but also the skill of Polish craftsmanship is represented within the hotel, whether in the lighting, in the carved burl wood headboards, the parquetry floors or the Warsaw skyline etched into the grey marble bathroom walls, rooting Raffles Europejski firmly in Poland. This sense of place is emphasised by the venerated hotel’s location on the historic Royal Route, with views from spacious and elegant guestrooms onto the Old Town, the Presidential Palace and, across the city’s biggest square, to the eternal flame burning at the Tomb of the Unknown Soldier and the leafy Saxon Gardens behind.

The 106 rooms and suites are classically stylish with blackened oak floors, contemporary Polish art, a corner library and sleek marble-clad bathrooms with Art Deco touches. But the jewel in the crown is the Presidential Suite, spread over a magnificent 293 square metres, and home to a 19th century piano, a reminder that this room was once host to recitals and piano concerts in another chapter of its rich history.

A NEW EPITOME OF SOPHISTICATED LUXURY IN POLAND

The Hotel Europejski was returned to its rightful pre-war owners in 2005, and Julien Barbotin-Larrieu, representing the owning company, H.E.S.A., explained their choice of Raffles to manage the property: “With Raffles at the helm of the hotel, a brand synonymous with heritage and luxury, whose own illustrious history began just thirty years after the Europejski’s with the iconic Raffles Singapore, we feel confident about bringing a new level of luxury to Warsaw; one that is as much about the cultural experience as the comfort. Our aim is to provide a real sense of place, allowing guests to understand the soul of Poland by immersing themselves in the art, the gastronomy and the history which they will be surrounded with, on a level as yet unsurpassed in the capital.”

With this in mind, the hotel will offer a variety of culinary options. Designed by acclaimed Spanish studio Lázaro Rosa Violán, the Europejski Grill, strikingly decorated in bold hues of blue and white, will serve modern Polish cuisine with a twist, overlooking Piłsudski Square. The Long Bar, a brand signature inspired by and named after the bar in Raffles Singapore where the Singapore Sling cocktail was invented over a century ago, is set at the heart of the hotel and will bring a new level of cocktails to the Warsaw scene from its sleek, marble-topped counter. The Humidor, the most exclusive lounge in the city, provides the perfect place for cigar lovers and connoisseurs of fine spirits with its club-like atmosphere of leather sofas, low lighting and a fireplace, whilst the Lourse Warszawa Patisserie, an elegant essay in white marble and brass trimming, is, as it famously was in previous times, the place to go for the cakes and pastries so loved in the city.

With Raffles renowned for placing wellness at the centre of the experience it offers, it comes as no surprise that the Raffles Spa will be one of the biggest and the best in Warsaw. A haven of tranquillity amidst the bustle of the city, it has six treatment rooms, a 24/7 gym, complete with Technogym™ and an upstream indoor swimming pool. Alongside bespoke treatments using exclusive brands Aromatherapy Associates and Sisley, the emphasis on holistic wellbeing, very much the DNA of Raffles spas worldwide, plays a key part in the spa experience with mindful meditation interwoven in the signature spa journeys.

Jeannette Ho, Vice President, Raffles Brand & Strategic Partnerships, AccorHotels Luxury Brands, comments: “I am delighted to be opening the iconic Raffles Europejski Warsaw, such a landmark in this capital city, to which we will bring the legendary Raffles service, known for its benchmark standard across the globe, as well as a series of gastronomic delights, conference facilities and an impressive spa.”

Raffles Europejski Warsaw joins 11 Raffles Hotels & Resorts around the world as well as hotels under development such as Raffles London, Raffles Boston Back Bay and Raffles The Palm Dubai. The remarkable collection of charming luxury hotels and resorts is located in many of the world’s most attractive cities and leisure destinations such as Paris, Istanbul and the Seychelles. Raffles properties feature distinct amenities including the Raffles Butler Service, Raffles Spa, Raffles Long Bar and Raffles Writers Bar.

Raffles Europejski Warsaw will bring over 160 years of history and heritage to the culturally rich Raffles Hotels & Resorts when it opens in Warsaw in June 2018, joining Paris and Istanbul as the third European destination where the inimitable Raffles service can be found. Dating back to 1857, and once a Grand Dame of European hotels in the 19th century, the property has been painstaking restored to its pre-war glory.  Proudly Polish, the elegant interiors showcase the very best of contemporary Polish artistry, creating a real sense of place, accentuated by its location on the Royal Route, with views from its 106 spacious and elegant guest rooms of the Old Town and the Saxon Gardens. The Europejski Grill, serving modern Polish cuisine and the best of international grills and seafood, a Long Bar inspired by the one in Raffles Singapore, a Humidor, the recreation of the famous Lourse Warszawa Patisserie, a beautiful Europejski Ballroom, and a Raffles Spa with indoor pool complete this new epitome of sophisticated luxury in Poland.

Raffles Hotels & Resorts boasts an illustrious history and some of the most prestigious hotel addresses worldwide.  In 1887, Raffles Singapore set the standard for luxury hospitality, introducing the world to private butlers, the Singapore Sling and its enduring, legendary service.  Today, Raffles continues this tradition in leading cities and lavish resort locales, enchanting travellers with meaningful experiences and service that is both gracious and intuitive. Connoisseurs of life choose Raffles, not merely for its aura of culture, beauty and gentility, but for the extraordinary way they feel when in residence with Raffles. Each Raffles, be it Paris, Istanbul, Warsaw, Jakarta or the Seychelles, serves as a venerated oasis where travellers arrive as guests, leave as friends and return as family. Raffles is part of AccorHotels, a world-leading travel and lifestyle group which invites travellers to feel welcome at more than 4,300 hotels, resorts and residences, along with some 10,000 of the finest private homes around the globe.