MARKED IMPROVEMENT IN OPERATING BUSINESS
ORGANIC GROWTH OF 7,800 ROOMS
OPERATIONAL SENSITIVITY CONFIRMED FOR THE REST OF THE YEAR

"Our performances during the third quarter point to a marked recovery of business during the summer season. The worst of the crisis is now behind us, but our main markets are still substantially affected by the measures rolled out to combat the health crisis. Only China reports solid performances and should swiftly recover its activity level pre-crisis.

Against this still uncertain context, discipline, adaptability and cost control are critical. We keep transforming our organizations to make the Group even more efficient, more agile, and focused on the most profitable and promising markets and segments. We are also deploying additional sources of revenue, in our hotels and in our loyalty program.

These efforts will help us benefit faster from recovery and pursue our ambitious development of the Group."

RevPAR fell by 62.8% during the third quarter of 2020, a significant sequential improvement in the wake of a difficult second quarter (RevPAR down by 88.2%). This improvement reflects a recovery in business in all regions, and most especially in Europe during the summer season. However the downturn in leisure customers, in addition to the introduction of new restrictions after the end of August, pushed the recovery down in September.

(1) Like-for-like: at constant scope of consolidation and exchange rates.

HotelServices, which combines fees for Management & Franchise (M&F) and services for owners, generated €224 million revenue, down by 69.0% like-for-like. This points to the deterioration of RevPAR due to the impact of the Covid-19 epidemic and health restrictions taken by governments worldwide.

Revenue of fees from Management & Franchise (M&F) stood at €72 million, down by 72.4% like-for-like, with a considerable fall in fees based on hotels' operating margins (incentive fees) in management contracts.
IMAGE 2

(1) Like-for-like: at constant scope of consolidation and exchange rates.

The Group's RevPAR dropped by an overall 62.8% during the third quarter.

In North America, Central America & Caribbean, Management & Franchise revenue was down by 80.0%, in line with an 83.4% fall in RevPAR during the third quarter. Plunging fees based on hotels' operating margins (incentive fees) were partially offset by a relatively sound performance by other revenues from Management & Franchise contracts.

Finally, in South America, Management & Franchise revenue fell by 87.2% on the basis of an 80.6% reduction in RevPAR, although this is gradually improving.

Revenue from services to owners, which includes Sales, Marketing, Distribution and Loyalty Divisions, shared services and reimbursed of hotel staff costs, stood at €153 million, as against €488 million at the end of September 2019.

Hotel Assets & Other Revenue, standing at €76 million with a decrease 57.1% like-for-like, were impacted by the RevPAR decrease in Australia and Brazil. The "Strata" business in Australiabenefitted from domestic leisure tourism in the country. In terms of reported data, the 72.3% fall was increased by the disposal of the Mövenpick hotel lease portfolio in early March 2020.

By the end of September 2020, New Businesses (concierge services, luxury home rentals, private sales of hotel stays and digital services for hotel owners) had revenue dropping to €23 million, or down by 43.6% like-for-like.

Accor usually announces an annual EBITDA guidance when it presents the half-yearly results and revenue for the third quarter. The present ever-changing environment and developments in the Covid-19 crisis do not afford sufficient visibility for a reasonable target range to be provided.

In this context, the Group is benefiting from its solid liquidity position, over €4 billion euros at the end of September, and despite limited visibility it is confirming 2020 operational sensitivity indicators as follows:
RevPAR excluding tax by segment – Q3 2020 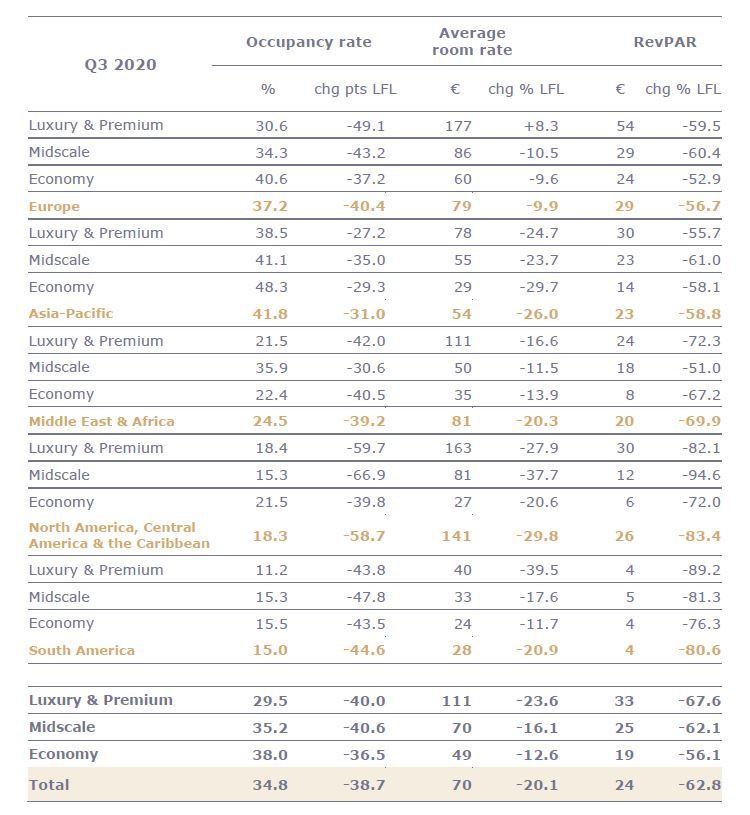 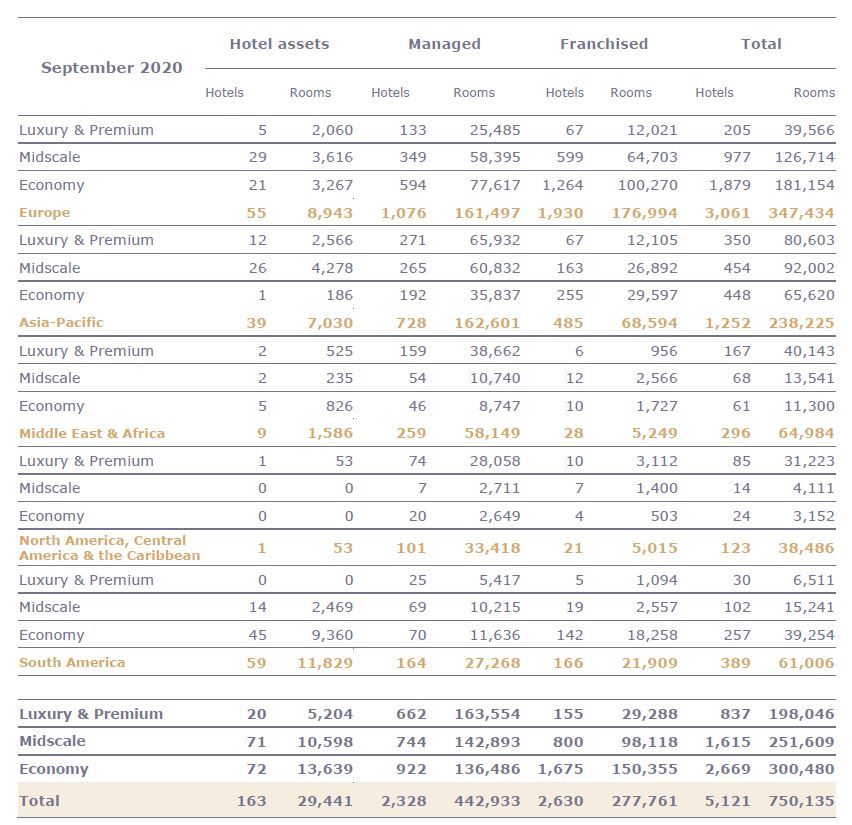 Accor is a world leading hospitality group consisting of more than 5,000 properties and 10,000 food and beverage venues throughout 110 countries. The group has one of the industry’s most diverse and fully-integrated hospitality ecosystems encompassing luxury and premium brands, midscale and economy offerings, unique lifestyle concepts, entertainment and nightlife venues, restaurants and bars, branded private residences, shared accommodation properties, concierge services, co-working spaces and more. Accor also boasts an unrivalled portfolio of distinctive brands and approximately 300,000 team members worldwide. Over 65 million members benefit from the company’s comprehensive loyalty program ALL - Accor Live Limitless - a daily lifestyle companion that provides access to a wide variety of rewards, services and experiences. Through its Planet 21 – Acting Here, Accor Solidarity, RiiSE and ALL Heartist Fund initiatives, the group is focused on driving positive action through business ethics, responsible tourism, environmental sustainability, community engagement, diversity and inclusivity.  Founded in 1967, Accor SA is headquartered in France and publicly listed on the Euronext Paris Stock Exchange (ISIN code: FR0000120404) and on the OTC Market (Ticker: ACRFY) in the United States. For more information visit group.accor.com or follow Accor on Twitter, Facebook, LinkedIn and Instagram.