Home > Newsroom > Corporate
Corporate
Sébastien Bazin, Chairman and Chief Executive Officer of AccorHotels, said:
The first half of 2018 saw AccorHotels continue the deep-seated transformation of its business model, with the sale of a majority stake in the capital of AccorInvest, the integration of Mantra in Australia and Mantis in South Africa, and the acquisition of Gekko in France. The second half of the year will see Mövenpick in Middle East, Atton in South America and sbe in the US join our network, enabling us to consolidate our market shares and the vast array of choices we offer our customers. The Group’s strong operating performance delivered solid results in first-half 2018 and record organic growth with the opening of 20,000 rooms over the period. Today, AccorHotels operates more than 4,500 hotels and 650,000 rooms around the world, the majority of which are located outside Europe. Underpinned by a reinforced pipeline, the Group’s strong prospects mean it is firmly on track to achieving its medium-term targets.
AccorHotels benefited from solid business levels in most of its key markets in the first half of 2018. With the opening of 45,150 rooms (301 hotels) during the period, of which 19,757 through organic growth and 25,393 via the acquisitions of Mantra and Mantis, at June 30, 2018 the Group had a portfolio of 652,939 rooms (4,530 hotels) and a pipeline of 167,000 rooms (959 hotels), of which 79% in emerging markets.

Reported revenue for the period reflects:
HotelServices reported business volumes of €8.9 billion, up 10.3% at constant exchange rates, and revenue of €1,205 million, up 6.8% like-for-like thanks to healthy growth and the fast pace of development.

HotelServices Management & Franchise (M&F) revenue amounted to €433 million, a like-for-like increase of 6.8% that reflects the solid growth seen in most of the Group’s key markets.
Revenue from HotelServices M&F by region

HotelServices RevPAR rose by 5.1% overall, reflecting gains in all segments: Midscale (+5.4%), Economy (+5.2%) and Luxury/Upscale (+4.6%).
In Europe, M&F revenue was up 4.2% on a like-for-like basis, underpinned by a 5.4% increase in RevPAR thanks to higher average room rates.
The Asia-Pacific region performed very well, turning in growth of 5.0% in RevPAR and 10.0% in M&F revenue.
With RevPAR down a slight 0.3%, the Middle East & Africa region posted stable M&F revenue (-0.2%).
North America, Central America & the Caribbean recorded a sharp increase of 15.9% in M&F revenue. The region’s RevPAR (+4.8%) reflected very robust activity in Canada (+7.5%), with strong growth in both the Leisure and Business segments.
Lastly, the situation continued to improve in South America, with RevPAR up 11.5% for the region. The increase was driven by business growth in Brazil, despite the strikes that paralyzed the country in May and the situation in Rio, which continued to be affected by a depressed socioeconomic environment and the overcapacity generated by the Olympic Games.

Organic development reached new record levels in the first half of 2018. Excluding acquisitions, AccorHotels opened 135 new hotels during the period, representing a total of 19,757 rooms. The future also looks very promising, thanks to a pipeline of 959 hotels and 167,000 rooms at June 30, which is a sharp increase on the end of the first quarter (157,000 rooms).
Services to Owners revenue, which includes the sales, marketing, distribution and loyalty division, as well as shared services and the repayment of hotel personnel costs, came to €773 million, versus €788 million at end-June 2017.

New Businesses now also includes Gekko’s hotel reservation solutions for business travelers, ResDiary’s restaurant reservation and table management services and Adoria’s management solutions for corporate and contract catering.
For first-half 2018, New Businesses recorded revenue growth of 7.1% like for like and 61.5% as reported, with revenue amounting to €70 million for the period, versus €43 million in first-half 2017.


Hotel Assets revenue increased by 8.6% like-for-like to €389 million. Europe accounted for 54% of the division’s revenue, Asia-Pacific (Timeshare, Strata and Accor+) for 25% and South America for 16%, and its RevPAR rose by 10.6% like-for-like.

Up 6.7% like-for-like, HotelServices EBITDA amounted to €312 million for first-half 2018, versus €311 million for the prior-year period.
EBITDA by business

In line with the healthy levels of business observed in the regions, the HotelServices M&F division recorded strong EBITDA gains in all of its markets.

At a negative €15 million, EBITDA for New Businesses was stable as reported and down 53.7% like-for-like.
This decrease is mostly attributable to onefinestay and John Paul, where topline growth notably relies on synergies and scaling plans with AccorHotels, which have not been delivered as planned. This, with incremental development costs, led to a negative scissor effect weighing on current performance.
In light of these factors, the Group recorded a provision for impairment at June 30, 2018, for an aggregate amount of €246 million.
Nevertheless, the Group firmly believes that both serviced private homes and concierge services offer strong potential in the Group’s ecosystem.

In the six months to June 30, 2018, funds from operations dropped to €235 million, versus €252 million in the same prior-year period.
Recurring investments, which include HotelServices’ digital and IT investments, as well as Hotel Assets’ maintenance and development investments, mainly related to the Orbis scope, amounted to €60 million compared with €66 million in first-half 2017.
The change in working capital requirement (including the change in assets and liabilities on contracts) is positive at €22 million. As a result, recurring cash flow rose to €196 million, compared with €122 million in first-half 2017.
The improvement in net debt during the first half resulted in a positive net cash position of €985 million at June 30, 2018. The change notably reflects net acquisitions for €949 million and €317 million for shareholder dividends, which were amply offset by the €4.6 billion cash injection from the sale of 57.8% of AccorInvest.
At June 30, 2018, the average cost of debt was around 2%.
On July 2, 2018, AccorHotels signed a new €1.2 billion revolving credit facility, whose margin is linked to the Group’s environmental, social and governance (ESG) performance.
Besides, as announced on February 27th following the signing of the agreements for the sale of a majority of the capital of AccorInvest, the Group confirms its intention to implement quickly a sharebuyback program of up to €1.350bn euros.

In light of the following factors:
The Group is forecasting full-year 2018 EBITDA of between €690 million and €720 million.


Air France-KLM
On June 3, 2018, as part of its strategy to enrich its range of services in the travel space, AccorHotels stated that it was considering the establishment of a strategic alliance with Air France-KLM. Reflections included a potential acquisition of a minority stake in the capital of Air France-KLM, jointly with French and European investors.
The Group remains convinced that a strengthened partnership between hotel companies and airlines offers significant value creation potential. However, given that required conditions for the acquisition of a minority stake in Air France-KLM have not been met at this stage, AccorHotels has decided not to further pursue this opportunity.
Events during first-half 2018 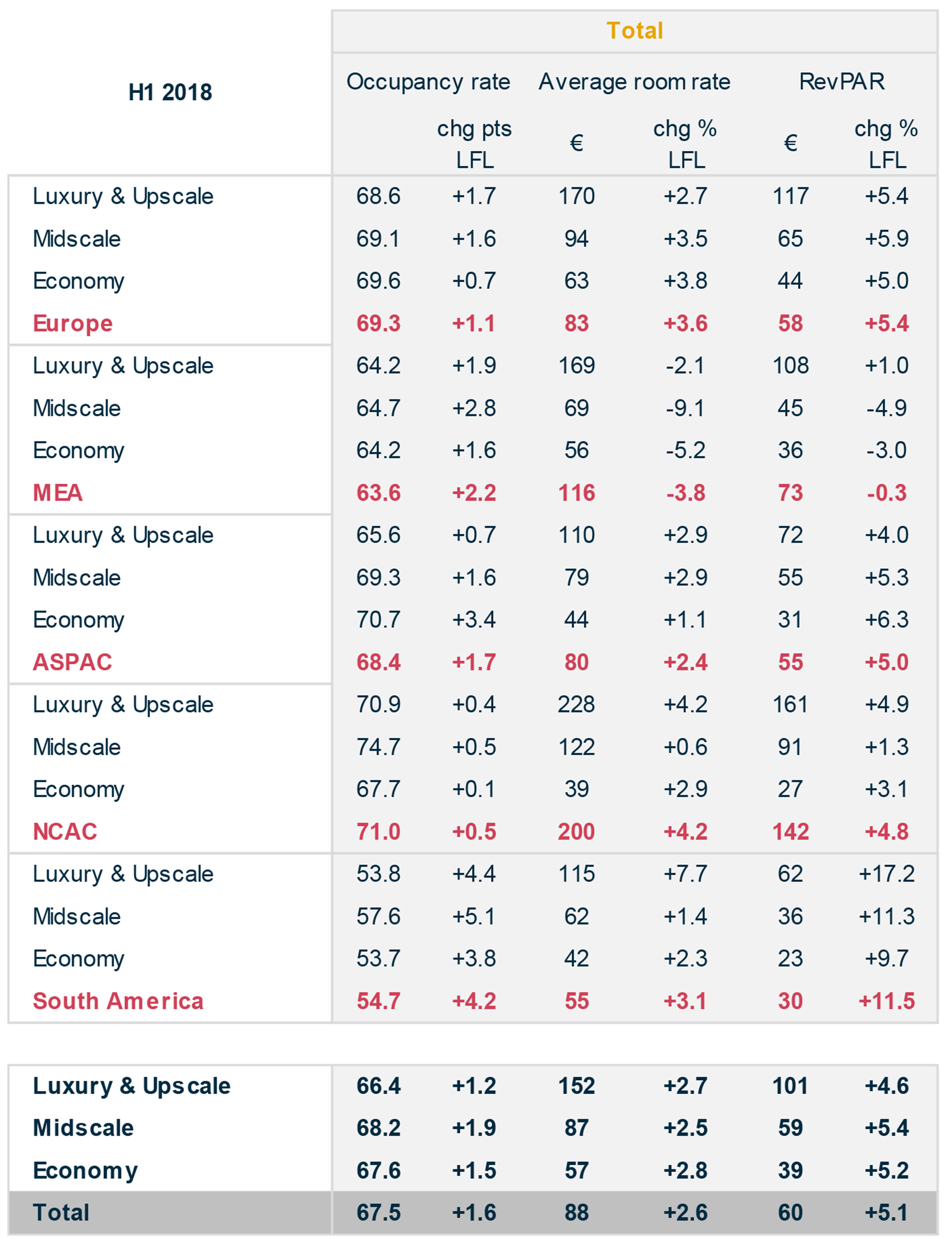 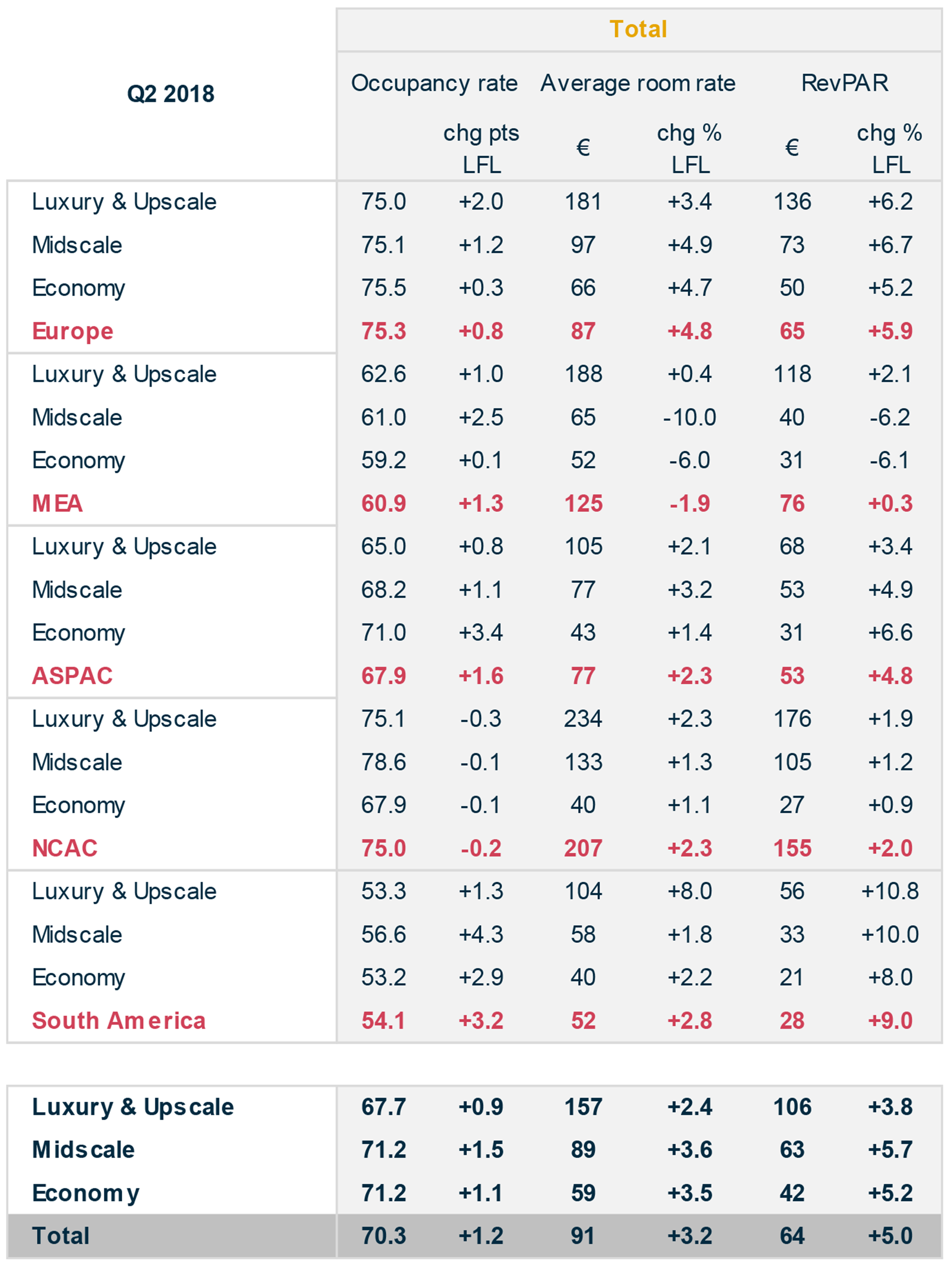 AccorHotels is a world-leading travel & lifestyle group and digital innovator offering unique experiences in more than 4,500 hotels, resorts and residences across 100 different countries.

With an unrivaled portfolio of internationally renowned hotel brands encompassing the entire range from luxury to economy, from upscale to lifestyle and midscale brands, AccorHotels has been providing savoir-faire and expertise for more than 50 years.

In addition to its core hospitality business, AccorHotels has successfully expanded its range of services, becoming the world leader in luxury private residence rental with more than 10,000 stunning properties around the world. The Group is also active in the fields of concierge services, co-working, dining, events management and digital solutions.

Relying on its global team of more than 250,000 dedicated staff, AccorHotels is committed to fulfilling its primary mission: to make every guest Feel Welcome.  Guests have access to one of the world’s most attractive hotel loyalty programs - Le Club AccorHotels.

AccorHotels plays an active role in its local communities and is committed to promoting sustainable development and solidarity through PLANET 21 Acting Here, a comprehensive program that brings together employees, guests and partners to drive sustainable growth.

From 2008, the AccorHotels Solidarity Endowment Fund has acted as a natural extension of the Group’s activities and values, helping to combat the social and financial exclusion experienced by the most disadvantaged members of society.

Accor SA is publicly listed on the Euronext Paris Stock Exchange (ISIN code: FR0000120404) and on the OTC Market (Ticker: ACRFY) in the United States.