“There were no surprises in our first-quarter performance. Global business trends are improving slightly and the ramp-up of the vaccine rollouts bodes well for a particularly strong rebound. As it did in 2020, the Group continues to keep a close eye on protecting its cash and cutting costs. Today, all our efforts are focused on the strong recovery expected this summer.”

RevPAR fell by 64.3% versus Q1 2019, reflecting an environment that remains hard hit by the Covid-19 epidemic. There were, however, significant year-on-year improvements in South Europe, Australia, the Middle East and North America.

Changes in the scope of consolidation (acquisitions and disposals) had a negative impact of -€25 million, largely due to the disposal of Mövenpick leased hotels in early March 2020.

The reorganization of the Group, and notably the change of the management structure in the frame of the RESET plan, resulted in a modification of the internal performance reporting and consequently of the segment reporting in accordance with IFRS 8 (operating segments):

The first-quarter 2021 information is also presented in the previous reporting format in the appendix to this press release, along with the figures for the last two years in the new format.

HotelServices, which comprises fees from Management & Franchise (M&F) and Services to Owners, reported €234 million in revenue, down 64% life-for-like versus Q1 2019. This decline reflects the Covid-19-related deterioration in RevPAR.

Revenue in the Management & Franchise (M&F) business was €73 million, down 69% like-for-like versus Q1 2019, with performance hit by the gradual spread of the virus in various regions. In general, the sharper decline in M&F revenue reflects the collapse in incentive fees based on the hotel operating margin generated from management contracts.

Consolidated RevPAR was down 64.3% overall in Q1 2021 versus Q1 2019. This decline reflects an environment that remains at the mercy of the health situation, notably linked to the emergence of Covid-19 UK variant.

RevPAR improved sequentially in South Europe to -63.2%, mainly due to the easing of some of the restrictions.
North Europe reported a sharper drop in RevPAR of 81.9% due to the extension of strict lockdown measures since end-2020.
In Asia-Pacific, RevPAR fell by 54.8%, with mixed performances by region.

In the India, Middle East, Africa & Turkey region, RevPAR was down 50.5%. This improvement in performance was driven by the United Arab Emirates, and more specifically by Dubai, which saw a strong inbound from Europe as most of the border restrictions have been eased.  Whether or not this regional improvement continues will depend on events expected to take place mainly in the second half of 2021, including the Hajj pilgrimage and Expo 2020.

RevPAR was down 72.8% in the Americas.
Hotel Assets & Other

Revenue in the “Hotel Assets & Other” segment was down 44% like-for-like versus Q1 2019, reflecting a smaller decline in RevPAR in Australia.

This segment now comprises New Businesses (concierge services, luxury home rentals, private sales of hotel stays, and digital services for hotel owners) which continue to be affected in different ways, ranging from the severely affected businesses directly related to the Travel sector, such as onefinestay’s private home rentals, to the digital businesses, such as the services provided by D-Edge.

Accor confirms its EBITDA sensitivity per point of RevPAR a tad below €18 million, down from 2019, and monthly cash burn of less than €40 million. These indicators should be viewed in the context of the Group’s healthy balance sheet, which has €3.6 billion in cash, of which €1.8 billion of undrawn revolving credit facility.

On February 5, 2021, Accor redeemed the maturing €550 million outstanding amount of a €900 million bond issued in February 2014. In 2019, this bond had been partially repurchased in the amount of €350 million. This redemption has been funded through the issuance of bonds convertible and/or exchangeable into new and/or existing shares (OCEANEs) on December 7, 2020.

On February 8, 2021, Accor obtained a one-year extension of the covenant holiday for the €1,200 million revolving credit facility, concluded on June 2018 a bank consortium. The covenant will not be tested on the next two test dates on June 30 and December 31, 2021.

On February 18, 2021, Accor sold a part of its share in Huazhu Group Ltd which represent 1,5% of share capital of the company for 239 million euros. After completion of this transaction, the Group retains a 3.3% residual interest in the share capital. 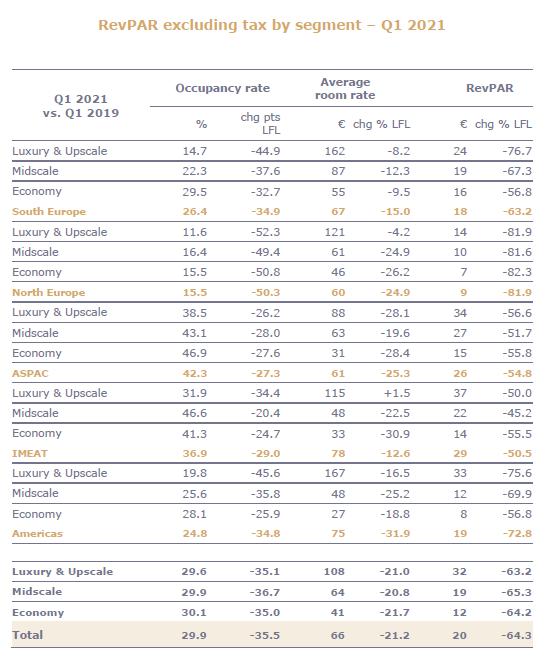 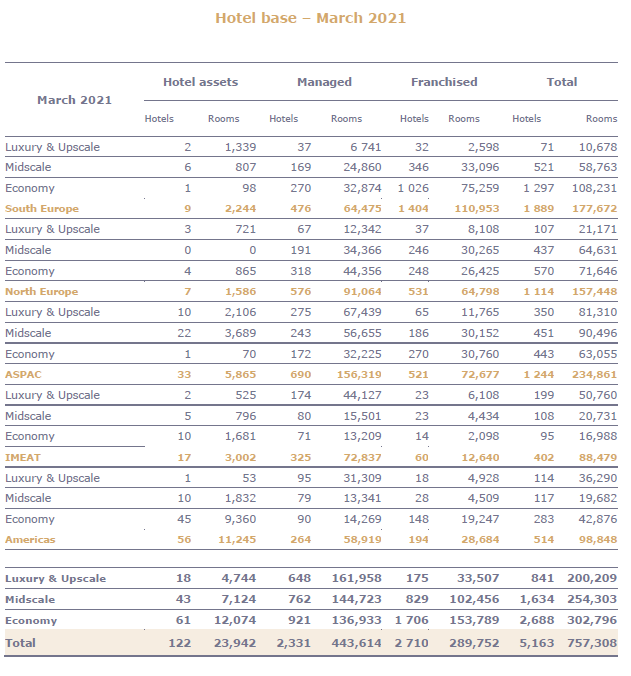 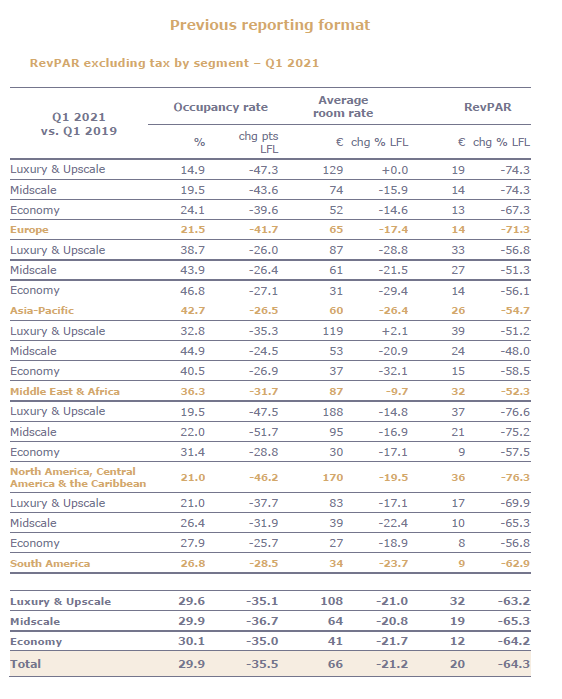 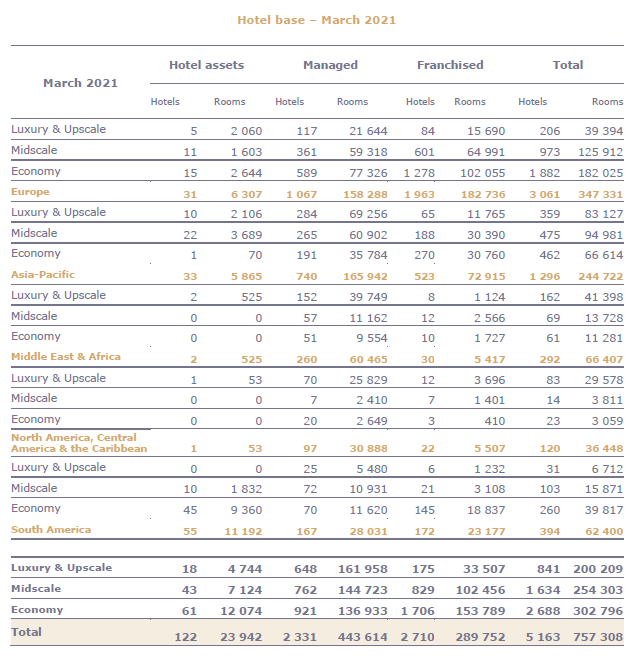 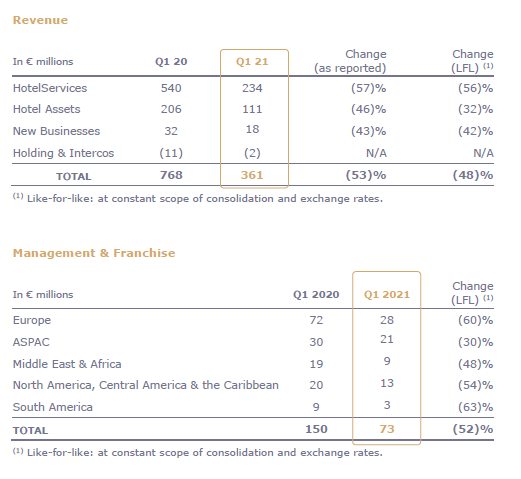 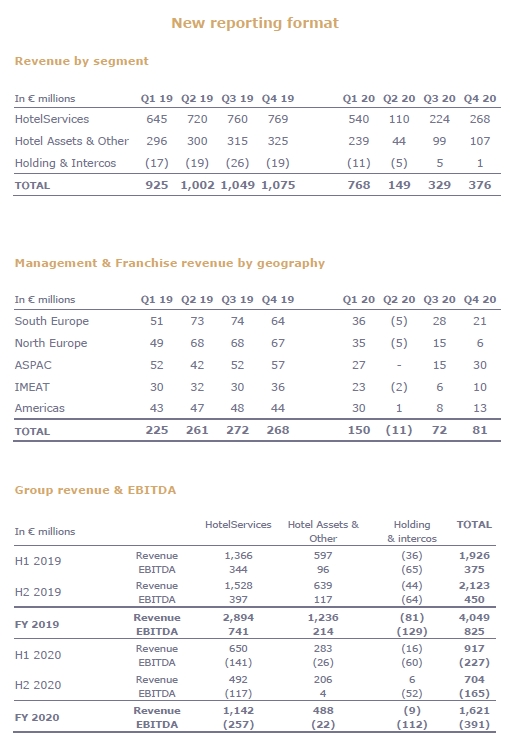 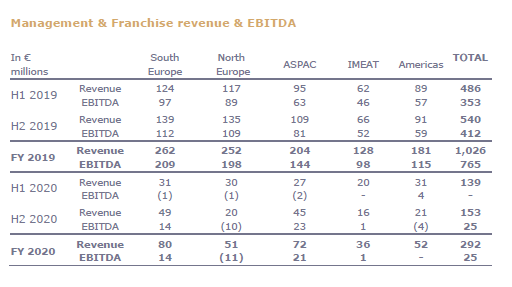 Accor is a world leading hospitality group consisting of more than 5,100 properties and 10,000 food and beverage venues throughout 110 countries. The group has one of the industry’s most diverse and fully-integrated hospitality ecosystems encompassing luxury and premium brands, midscale and economy offerings, unique lifestyle concepts, entertainment and nightlife venues, restaurants and bars, branded private residences, shared accommodation properties, concierge services, co-working spaces and more. Accor also boasts an unrivalled portfolio of distinctive brands and mora than 260,000 team members worldwide. 68 million members benefit from the company’s comprehensive loyalty program ALL - Accor Live Limitless - a daily lifestyle companion that provides access to a wide variety of rewards, services and experiences. Through its Planet 21 – Acting Here, Accor Solidarity, RiiSE and ALL Heartist Fund initiatives, the group is focused on driving positive action through business ethics, responsible tourism, environmental sustainability, community engagement, diversity and inclusivity.  Founded in 1967, Accor SA is headquartered in France and publicly listed on the Euronext Paris Stock Exchange (ISIN code: FR0000120404) and on the OTC Market (Ticker: ACCYY) in the United States. For more information visit group.accor.com or follow Accor on Twitter, Facebook, LinkedIn and Instagram.