AccorHotels Group is consolidating its international presence and has reached the symbolic milestone of 100 countries. 50 years after opening the first Novotel in France, AccorHotels has established itself as the leader in Europe, Latin America, Asia-Pacific, Africa and the Middle East.

This record total pipeline - 25% of the existing network - will continue to grow, supported by three strategic priorities: 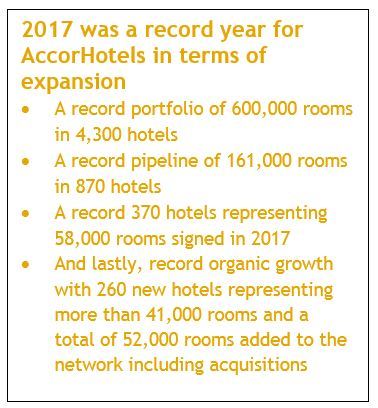 The Luxury and Upscale segment recorded very strong growth in 2017, with figures doubling compared to 2016. In this segment, 30 hotels opened and another 60 have been signed during the year, mainly in Asia-Pacific (59%) and Africa-Middle East (24%). In addition to its iconic brands, the portfolio is expanding in the lifestyle segment, with 15 SO/ hotels projected by 2022, and in resorts with Banyan Tree and Rixos. The development of hotel residences and private properties under the Luxury and Upscale brands is also a major focus with more than 50 projects in development.

Gaurav Bhushan, Chief Development Officer at AccorHotels, said, “Our development strategy is very simple: to remain the leader in the markets where we are dominant and to accelerate growth in emerging markets. The Group’s extensive portfolio of brands and its acquisition and innovation policy therefore play a key role in our development. We signed some flagship projects in 2017, including Raffles hotels, in London and Dubai in particular. The SO/ brand is also taking off in the luxury segment, while MGallery is the fastest growing brand in this segment. The signing of the Mercure Dubai (1,115rooms), which is set to become the largest Mercure in the world, and the current renovation of ibis Barcelona are also examples of our continued fast paced growth and innovation in the midscale and economy segment.”

In 2017, AccorHotels further accelerated its organic growth with the signing of 145 projects representing almost 17,000 rooms (up 40%) in order to consolidate its leadership in this region. With two new iconic, market-leading brands (25 Hours and Rixos), Accorhotels is affirming its new ambitions in the Luxury, Lifestyle and Resorts segments in Europe.

In 2017, AccorHotels was the fastest expanding hotel group in this region. With a pipeline of 32,000 rooms and a target of 50,000 by 2020, the Middle East and Africa region is a central focus of the expansion of AccorHotels, which has introduced new disruptive brands such as Mama Shelter, MGallery and 25 Hours.

As the leading operator in Asia-Pacific, AccorHotels has 830 hotels in Asia-Pacific, including 245 in the luxury segment. Asia-Pacific accounts for 47% of the Group’s global pipeline and will continue to grow in importance on a global scale as the world’s fastest growing travel region.

AccorHotels operates 80 hotels in Central and North America, more than half of which are in the luxury segment. In 2017, several new developments were announced in North and Central America, with a secure pipeline of more than 4,100 new hotel rooms. With robust growth plans, the Group aims to expand its presence in the region and to introduce new brands to the portfolio in key strategic markets.

More information about the development of our brands in the coming months is available in the following PDF on development: https://we.tl/kGJDOSUQxa

AccorHotels is a world-leading travel & lifestyle group and digital innovator offering unique experiences in more than 4,300 hotels, resorts and residences, as well as in over 10,000 of the finest private homes around the globe. Benefiting from dual expertise as an investor and operator, AccorHotels operates in 100 countries. Its portfolio includes internationally renowned luxury brands such as Raffles, Sofitel Legend, SO/, Sofitel, Fairmont, onefinestay, MGallery by Sofitel, Pullman and Swissôtel, the mid-range boutique hotel brands 25hours, Novotel, Mercure, Mama Shelter and Adagio, and very popular budget brands such as JO&JOE, ibis, ibis Styles and ibis budget, as well as the regional brands Grand Mercure, The Sebel and hotelF1. AccorHotels provides innovative end-to-end services across the entire traveler experience, notably through the acquisition of John Paul, world leader in concierge services.