“In line with the good trends of 2017, business remained strong in the first quarter in the vast majority of regions. Europe and Asia, our two key markets, continue to benefit from a buoyant environment. Our development continues at a sustained pace. At the same time, our new businesses are taking shape and gradually gaining momentum. To complement this, the Group is pursuing its strategy of growth and consolidation of its ecosystem through targeted acquisitions. Since the beginning of the year, this has resulted in Gekko, Mantis and ResDiary joining the world of AccorHotels. In short, the Group is continuing its fast-paced transformation to build an increasingly comprehensive offering to serve its customers.”

Changes in the scope of consolidation (acquisitions and disposals) had a positive impact of €8 million (+1.2%), thanks in particular to the contributions of Availpro, VeryChic, Travel Keys and Gekko.

Currency effects had a negative impact of €63 million, attributable to the euro’s substantial appreciation against all other currencies, and in particular the US dollar (15%).

Due to the change in its model and the application of IFRS 15, AccorHotels has modified its reporting.

In accordance with IFRS 15, for certain management contracts, the Group’s financial statements now include the hotel operating expenses that are fully reinvoiced to the owners. These expenses have no impact on EBITDA. This recognition nevertheless results in lower margins, by basing them on a greater amount of revenue.

AccorHotels has also taken the components of HotelServices that were until now housed in “Other activities” and regrouped them by nature in a new HotelServices division dedicated to “Service to Owners” and in Hotel Assets.

In the first quarter of 2018, the Group posted a robust 9.5% increase in revenue at constant scope and exchange rates (LFL), driven by strong growth in HotelServices (+7.7%) and Hotel Assets (+7.5%). New Businesses revenue grew by 14.5% like-for-like.

HotelServices, which operated 4,304 hotels (619,058 rooms) under franchise agreements and management contracts at the end of March 2018, reported a 7.7% like-for-like increase in revenue to €553 million. This growth is the result of very strong business in all regions.

The Management & Franchise business posted revenue growth of 7.2%, driven both by healthy business volumes and the Group’s rapid growth:

Consolidated RevPAR was up 5.3% overall.

RevPAR was down 0.9% in the Middle East & Africa region, reflecting a contrast between Africa (+6.0%) and the Middle East (-2.9%). The performance in Africa was driven chiefly by Morocco, while the Middle East continues to be penalized by geopolitical tension and low oil prices, as well as by the increase in hotel capacity, temporarily affecting Dubai and Riyadh above all.

The Asia-Pacific region performed very well, with strong momentum in virtually all countries. RevPAR increased by 5.3%, driven notably by the timing of the Chinese New Year. This resulted in an 8% increase in RevPAR in China over the quarter. Australia’s RevPAR was up 2%, despite the negative effect of the shift in the Easter weekend. Southeast Asia was also buoyant, with a strong customer base driving RevPAR in Thailand and Vietnam.

North America, Central America & the Caribbean delivered an 8.4% increase in RevPAR, with healthy business in Canada (+9.6%) and the United States (+8.7%).

Lastly, growth has resumed in South America, and more specifically in Brazil. RevPAR was up 13.9%, with a very pronounced acceleration across the entire country, except in Rio, where overcapacity resulting from the Olympic Games and social tension continue to dampen demand.

The Group’s development continues at a rapid pace. During the first quarter, AccorHotels opened a record 61 new hotels, representing nearly 10,000 rooms. At the end of March 2018, the Group’s pipeline comprised 870 hotels and 153,000 rooms, of which 78% in emerging markets and 51% in the Asia-Pacific region.

New Businesses comprises businesses developed by the Group over the last two years, mainly through acquisitions. In the three months to end-March 2018, divisional revenue amounted to €31 million compared with €13 million in the same period in 2017, representing like-for-like growth of 14.5%.

With the market firming considerably in Brazil, Orbis also continues to deliver a very strong performance in Eastern Europe. Overall, the Hotel Assets business generated revenue of €157 million, an increase of 7.5% like-for-like.

Signature of the sale of a majority stake in AccorInvest

Following the February 27th announcement, AccorHotels announces that it has signed today the contract relating to the sale of a majority stake in AccorInvest, after the completion of the competent employee representatives bodies consultation process marked by a constructive dialogue.

Under the terms of this agreement, AccorHotels will initially transfer approximately 55% of the share capital of AccorInvest. The implementation of this agreement remains subject to certain conditions, in particular the approval from the Foreign Investment Review Board (FIRB) in Australia. This transaction will also be subject to the consultation of AccorHotels’ shareholders at the annual general meeting to be held this Friday 20th April. This transaction should as planned be finalized before the end of the 2018 second quarter.

On February 27, 2018, AccorHotels announced the signing of agreements with a group of French and international investors with a view to selling a majority of the capital of AccorInvest. Under the terms of the agreements, the Group will sell 55% of AccorInvest to a group of investors made up of sovereign wealth funds, namely the Public Investment Fund (PIF) and GIC, institutional investors, namely Crédit Agricole Assurances, Colony NorthStar and Amundi, and other investors. Upon completion of the transaction, AccorHotels will benefit from a gross cash injection of €4.4 billion. The transaction is expected to be finalized in the second quarter of 2018. It will result in AccorInvest being consolidated by the equity method in AccorHotels’ financial statements in proportion to the residual interest.

On February 27, 2018, AccorHotels announced plans to implement over a two‑year period a share buyback program of up to 10% of its share capital, i.e., €1,350 million on the basis of its market capitalization at the end of February 2018.

On April 5, 2018, AccorHotels announced that it had entered into a strategic agreement with the Mantis group, a South African conglomerate operating five‑star properties and lodges around the world. 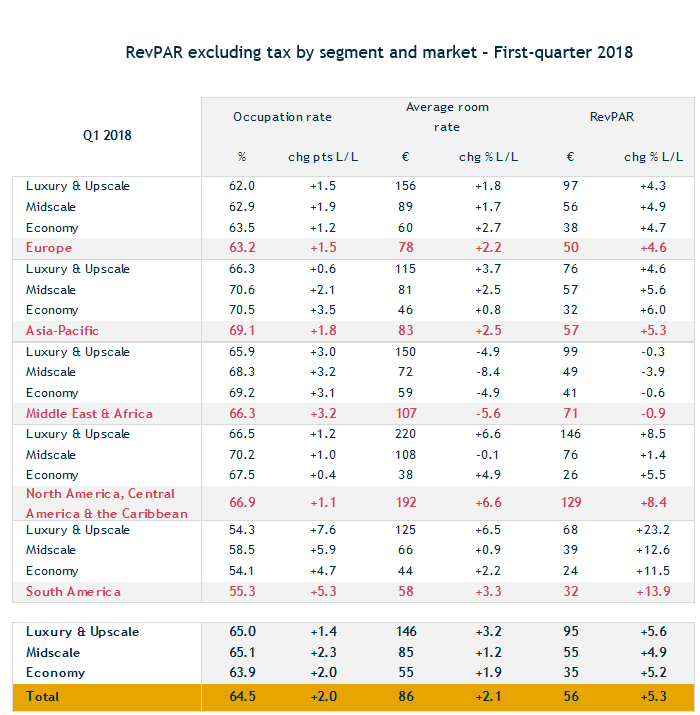 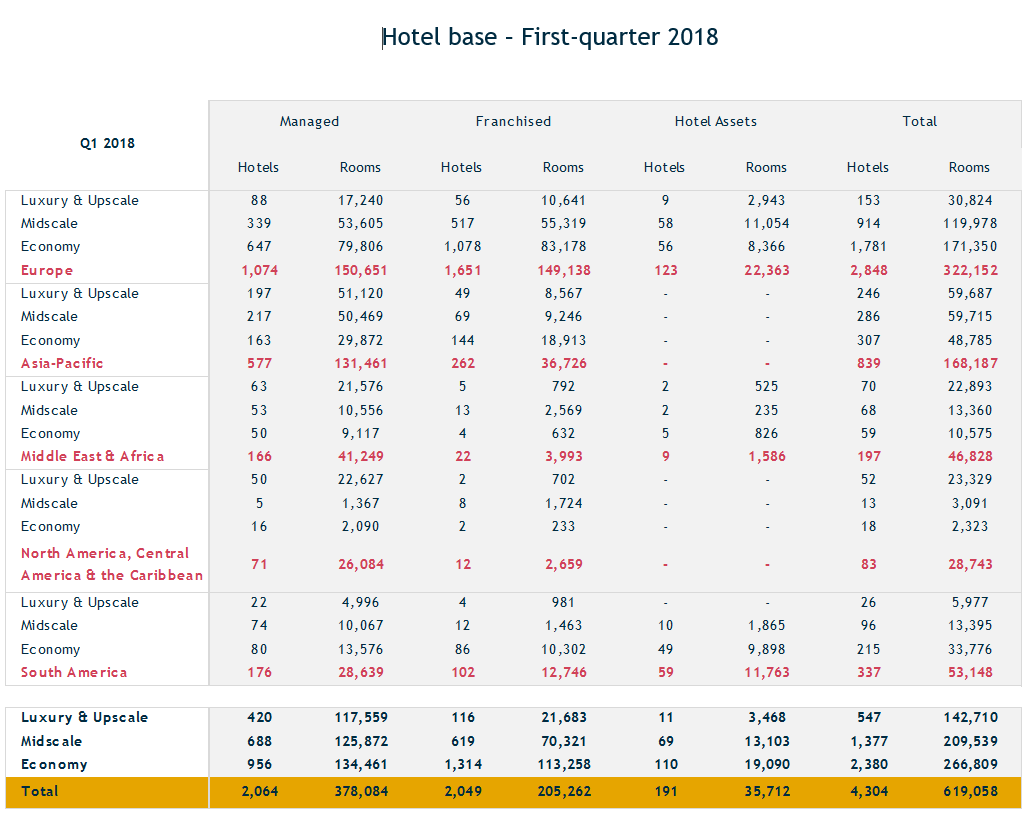 AccorHotels is a world-leading travel & lifestyle group and digital innovator offering unique experiences in more than 4,300 hotels, resorts and residences, as well as in over 10,000 of the finest private homes around the globe. Benefiting from dual expertise as an investor and operator, AccorHotels operates in 100 countries. Its portfolio comprises internationally acclaimed luxury brands including Raffles, Sofitel Legend, SO Sofitel, Sofitel, Fairmont, onefinestay, MGallery by Sofitel, Pullman and Swissôtel; the popular midscale and boutique brands of 25hours, Novotel, Mercure, Mama Shelter and Adagio; the much-prized economy brands including JO&JOE, ibis, ibis Styles, ibis budget and the regional brands Grand Mercure, The Sebel and hotelF1. AccorHotels provides innovative end-to-end services across the entire traveler experience, notably through the recent acquisition of John Paul, the world leader in concierge services.

With an unmatched collection of brands and a rich history spanning close to five decades, AccorHotels, along with its global team of more than 250,000 dedicated women and men, has a purposeful and heartfelt mission: to make every guest Feel Welcome. Guests enjoy access to one of the world's most rewarding hotel loyalty programs – Le Club AccorHotels.

Accor SA shares are listed on the Euronext Paris stock exchange (ISIN: FR0000120404) and traded in the United States on the OTC market (Code: ACRFY)