Sébastien Bazin, Chairman and Chief Executive Officer of Accor, said:
“Since May, we have seen a clear recovery. Positive signs including the ramp up of vaccine roll out and the progressive reopening of borders will continue throughout the summer.
In the first half of the year, Accor significantly improved its operating performance. Furthermore, we continued to efficiently and cautiously manage our liquidity and investments. We are therefore prepared for the rebound with a solid balance sheet and an increasingly agile and efficient organizational structure. It is still too early to fully define the outlook for the end of the year, but we are confident in our ability to capture recovery in all geographies and to put into place a reinvented vision of travel.”

HotelServices, which includes fees from Management & Franchise (M&F) and Services to Owners, reported €545 million in revenue, down (60)% like-for-like versus H1 2019. This decline reflects a deterioration in RevPAR ((60)% compared with H1 2019), linked to restrictions of the Covid-19 health crisis.

The Management & Franchise (M&F) business reported revenue of €163 million, down (67)% like-for-like compared with H1 2019. By region, M&F revenue performance is linked to the business recovery pace. In general, the sharper decline in M&F revenue mainly reflects the collapse in incentive fees based on the hotel profitability generated from management contracts over the period.

Consolidated RevPAR posted an overall decline of (60)% in H1 2021 compared with H1 2019 and of (58)% in Q2 2021 versus Q2 2019. This decline hides heterogeneous situations by country and an improvement of about 5 points every month since April. Moreover, July also confirms this trend.

RevPAR in South Europe was down (63)% vs. Q2 19 impacted by the lockdown implemented in France in April.

RevPAR in North Europe rebounded in Q2 at (74)% after a Q1 marked by lockdown measures.

In the India, Middle East, Africa & Turkey (IMEAT) region, RevPAR was down (44)% in Q2 2021. This performance was driven by Dubai which benefited from a recovery in leisure guests and largely eased border restrictions. Whether or not this regional improvement continues will depend on events expected to take place mainly in the second half of 2021, including Expo 2020. Saudi Arabia was impacted by restrictions around pilgrimage. Umrah permits were stopped since end-mid June before resuming on August 10th.

In the Americas, RevPAR was down (63)% in Q2 2021 with Brazil and the US strongly accelerating in June.
Services to Owners revenue, which includes the Sales, Marketing, Distribution and Loyalty division, as well as shared services and the reimbursement of hotel staff costs, came to €383 million in the first half of 2021, versus €511 million in H1 2020. This change mainly reflects the reduction in reimbursements of hotel staff costs of which volume had been adjusted downwards with a one to two-month delay.

Hotel Assets & Other revenue was down (38)% like-for-like versus H1 2019. This change reflects a smaller decline in RevPAR in Australia, where leisure demand has recovered significantly in the vast domestic market.

This segment now includes New Businesses (concierge services, luxury home rentals, private sales of hotel stays, and digital services for hotel owners) which continue to be affected in different ways, ranging from the severely affected businesses directly related to the Travel sector, such as onefinestay’s private home rentals, to the digital businesses, such as the services provided by D-Edge.

Consolidated EBITDA was €(120) million in H1 2021, up 58% like-for-like compared with H1 2020. Sensitivity of EBITDA to RevPAR changes amounted to less than €(16) million for each percentage point decline in RevPAR vs. 2019 thanks to permanent cost savings initiatives which are delivering results, close monitoring of the variable costs, our exposure to Australia where the activity strongly rebounded, and the recovery of incentives over the period. 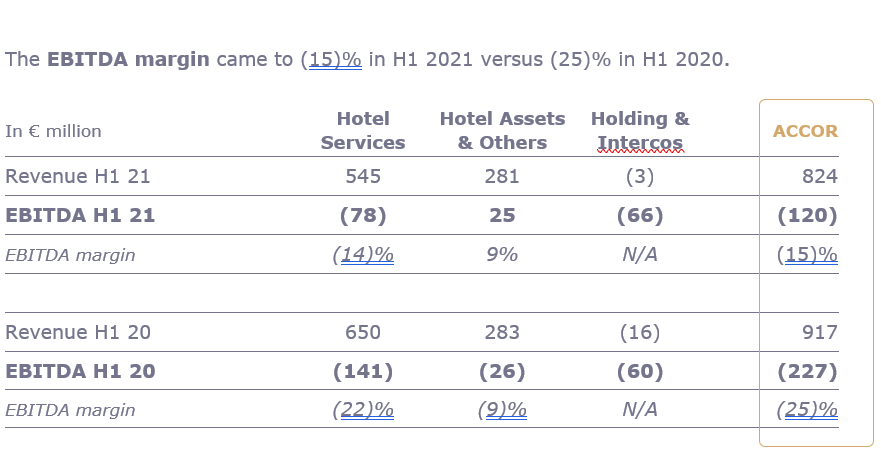 HotelServices EBITDA was negative at €(78) million for H1 2021. This performance breaks down as positive EBITDA for Management & Franchise (M&F) and a negative contribution from Services to Owners. The latter stems from high fixed costs coupled with a sharp decline in RevPAR for the Sales, Marketing, Distribution and Loyalty (SMDL) businesses. Reimbursed hotel staff costs structurally remain at breakeven at the EBITDA level.

The Management & Franchise HotelServices division saw EBITDA back in positive territory and down (85)% compared with H1 2019. Overall, the sharper decline in percent for EBITDA versus revenue can be attributed to fixed costs.

Nevertheless, the recovery of incentive fees based on hotel profitability from management contracts, as well as the very low amount of provisions for doubtful receivables together with permanent cost savings delivering results, all contributed to a more moderate decline than in H1 2020.

Hotel Assets & Other EBITDA amounted to €25 million in H1 2021 versus a negative €(26) million in H1 2020. The (50)% like-for-like decline compared with H1 2019 reflects the business recovery in Australia, where most of this segment’s activity is located (64%) and measures implemented to adjust the cost structure, limiting losses. These measures included headcount reductions and/or use of partial unemployment in Europe and in Australia. 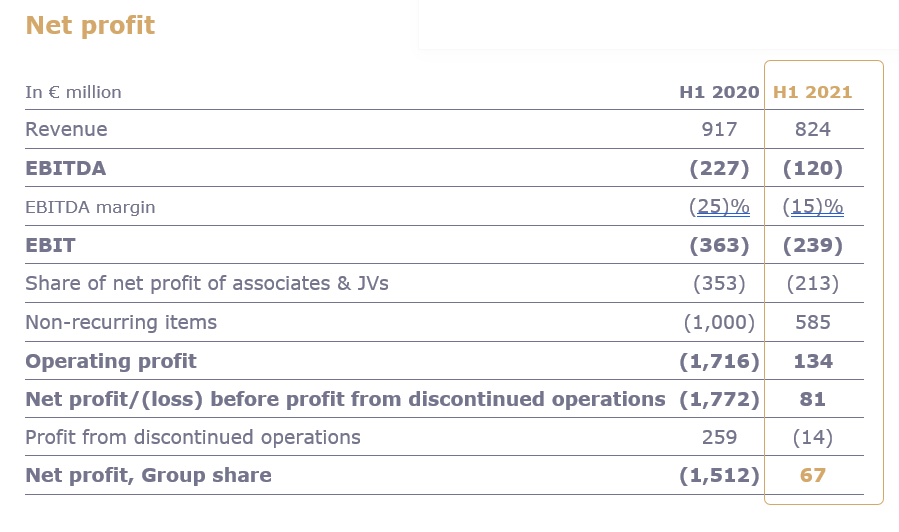 In details, aside from the improvement of EBITDA explained in the previous paragraphs, the net profit is impacted by: 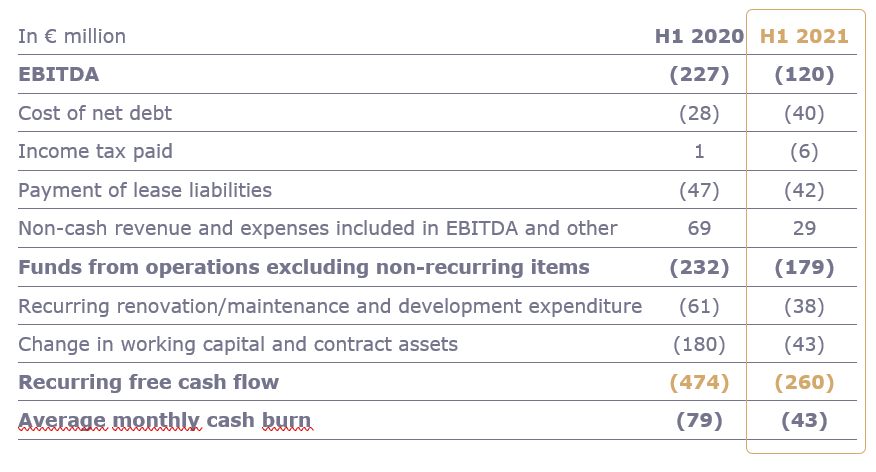 The Group’s consolidated net debt as of end-June 2021 came to €1,700 million, versus €1,346 million from December 31, 2020. This increase stems notably from cash consumption over the period, with the proceeds of the disposal of the 1.5% stake in Huazhu in February 2021 offsetting non-recurring expenditure (o/w €154 million as part of the AccorInvest capital increase in Q1 2021).

The different initiatives making up the RESET recurring cost savings plan, presented on August 4, 2020 and on February 24, 2021 were confirmed. The timeframe for unlocking the benefits on the income statement remains unchanged: EBITDA should benefit from a positive impact of €70 million in full-year 2021.

Based on our hypothesis and the trend observed since the beginning of the year, Accor confirms its EBITDA sensitivity per point of RevPAR slightly below €18 million, vs. 2019, and average monthly cash burn of less than €40 million.

On January 14, 2021, the Extraordinary General Meeting of AccorInvest’s shareholders approved the completion of a €150 million capital increase subscribed by almost all shareholders in proportion to their ownership, representing €45 million for Accor. Furthermore, a second tranche amounting to €327 million (including €109 million for Accor) was approved at the company’s Extraordinary General Meeting held on March 1, 2021. These two transactions are part of the bank financing restructuring negotiated by AccorInvest, which also provides for a loan backed by the French government.

On February 5, 2021, Accor redeemed the maturing €550 million outstanding amount of a €900 million bond issued in February 2014. In 2019, this bond had been partially repurchased in the amount of €350 million. This redemption has been funded through the issuance of bonds convertible and/or exchangeable into new and/or existing shares (OCEANE) on December 7, 2020.

Covenant holidays
On February 8, 2021, Accor obtained a one-year extension of the covenant holiday for the €1,200 million revolving credit facility, agreed in June 2018 with a bank consortium. The covenant will not be tested on the next two test dates on June 30 and December 31, 2021.

On February 18, 2021, Accor sold a part of its share in Huazhu Group Ltd, representing 1.5% of share capital of the company for €239 million. After completion of this transaction, the Group retains a 3.3% residual interest in the share capital.

Following the announcement of its intention to sponsor the Special Purpose Acquisition Company (SPAC) on May 20, 2021, Accor successfully took part in a private placement and the Euronext Paris initial offering of Accor Acquisition Company (AAC). This SPAC successfully raised €300 million with a view to acquire one or more companies in sectors related to the core hotel business operated by Accor,
notably in the Food & Beverage segment, but also for flex office activities, wellness, entertainment and events and technologies linked to the hotel industry.

Accor is a world leading hospitality group consisting of more than 5,100 properties and 10,000 food and beverage venues throughout 110 countries. The Group has one of the industry’s most diverse and fully-integrated hospitality ecosystems encompassing luxury and premium brands, midscale and economy offerings, unique lifestyle concepts, entertainment and nightlife venues, restaurants and bars, branded private residences, shared accommodation properties, concierge services, co-working spaces and more. Accor also boasts an unrivalled portfolio of distinctive brands and mora than 260,000 team members worldwide. 68 million members benefit from the company’s comprehensive loyalty program – ALL - Accor Live Limitless– a daily lifestyle companion that provides access to a wide variety of rewards, services and experiences. Through its Planet 21 – Acting Here, Accor Solidarity, RiiSE and ALL Heartist Fund initiatives, the Group is focused on driving positive action through business ethics, responsible tourism, environmental sustainability, community engagement, diversity and inclusivity. Founded in 1967, Accor SA is headquartered in France and publicly listed on the Euronext Paris Stock Exchange (ISIN code: FR0000120404) and on the OTC Market (Ticker: ACCYY) in the United States. For more information visit group.accor.com, or follow Accor on Twitter, Facebook, LinkedIn, and Instagram.